Past and present. A collection of articles and photos about Harwell.

A landmark elm tree, south of the village.
From an Alms House Charity Trustee (June 2020):

In 1974 the “Baggs Tree”, which was an Elm somewhere in the region of 250 years old, was felled.  The reason for this was that a tree preservation officer was concerned about it being a possible infective source for Dutch Elm Disease although the tree itself was deemed healthy!  It had apparently been struck by lightning some years earlier.

The neighbour. who had moved into Winnaway Farm next to Baggs Tree field in 1971, objected strongly to the felling but was overruled.

in 1981 the Charities trustees agreed to planting on the same site, and it seems that 5 Beech trees were planted.  There are now two trees which don’t look anything like 38 years old but apparently must be.  The soil is awful, and it is very exposed, but so it is everywhere locally. 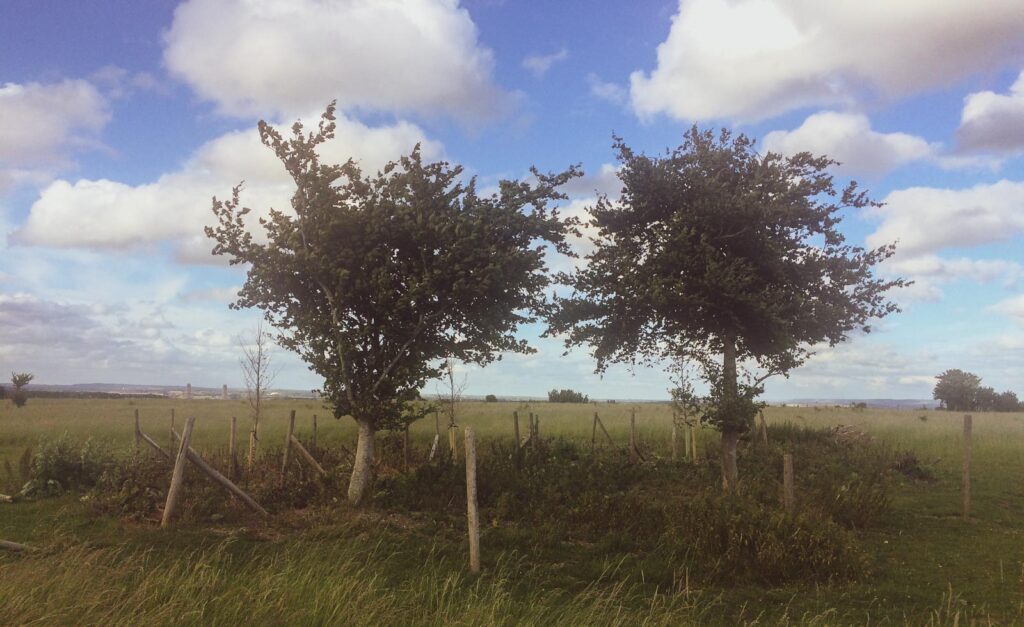 A photograph of the two Beech trees at the site of the Bagg’s Tree. (Photo credit: AW)

Bagrun, King of the Daves 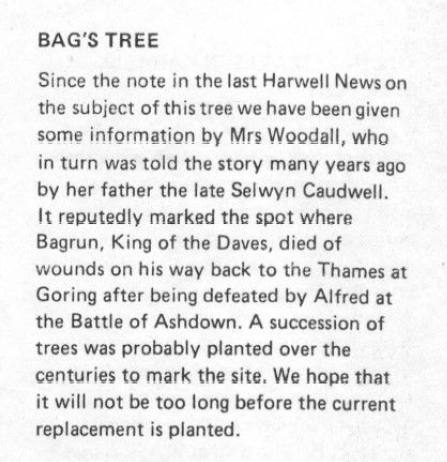 It’s very Monty Pythonesque to have a King of the Daves, but that aside the geography is suspect.

All the current wisdom says the Battle of Ashdown was near Lowbury Hill, either in Danes Bottom, or Oven Bottom, or stretched out in between (or at Kingstanding Hill).  [Wikipedia]

To return from Lowbury Hill to the Thames, via Harwell is a very long way round.

So either Bag’s tree is nothing to do with Bagrun, or the battle was elsewhere.  Maybe this Harwell story arose because they thought the Battle of Ashdown was actually to the west, at Ashdown House and Park, south of Ashbury.  There’s an Alfred’s Castle marked on the OS map.

King Alfred won a great victory against the Danes at the Battle of Ashdown, in AD 871. Being located just to the west of Ashdown House, Victorian antiquaries associated Alfred’s Castle with the King’s troop movements before the battle. The exact site of Alfred’s battle has not yet been determined, however, so is a matter for debate. The most likely sites are near Compton and Aldworth in Berkshire.]

A comment in the Millennium Book, rules out the King of the Danes ever being called Bagrun – he was Bægsecg or Bagsec.

Recently a very old elm tree known as Bagg’s Tree was cut down. For centuries it had stood as a lone landmark in what was once West Field, about 250 yards east of an old track called “Winnow Way” leading up from the village to the Downs and the A34.

The tree does not appear to have stood on a recognised boundary as many others mentioned in old estate documents. Bagg’s Tree was regarded as a fixed position in a large open field before the days of the enclosure awards.

John Loder, the farmer and landowner of Prince’s Manor, Harwell, thus regarded it in the 16th Century, for he mentions it in his will in 1577 in connection with an endowment of 14 acres, 1 rood 35 perches “near Bagg’s Tree”.

Nearly a century later a Christopher Elderfield also mentioned it in his will of 1652 with a further endowment at Harwell near Bagg’s Tree. In 1908, these lands were leased out and the proceeds used for “the maintenance of the Parish Church and benefit of the Poor”.

BAGG or BAGGA seems to have been an old personal name in the district with suggestions that it may refer to a “wood or grove” belonging to “Bagga”. The surname Bagg or Bag’s has long been associated with this district from the middle ages. A member of our local community who is now 95 years old, can still remember from her younger days a Mr. Baggs being a “packman or better known today as a door to door salesman” coming to visit various houses in the village.

(The Harwell Charity Trustees are erecting 5 beech trees around the existing root of the old tree so that the spot will continue to be marked for years to come.)

The ancient elm known as Bag’s (formerly Bagg’s) Tree, grew, until 1975, on the Downs above Harwell, between the Chilton track and the Winnaway. It gave its name to the surrounding field, and is mentioned in the John Loder charity as some fourteen acres awarded in lieu of Grove land in the West Field of Harwell, at the time of the enclosures (1802-05). It is still owned by the Harwell Parochial Charities.

Traditionally it is said to have marked the spot where Bagrun, king of the Danes, died of wounds on his way back to the Thames at Goring after being defeated by Alfred at the battle of Ashdown. A succession of trees was probably planted over the centuries to mark the site. When the latest elm had to be felled, its trunk measured 4.3 metres round. Its age was estimated at about 275 – 300 years, roughly the life span of an elm.

Between 1695 and 1722, twelve people called Baggs are mentioned in the parish register as having been baptised or buried. The Oxford Dictionary gives the verb bag(gg) as meaning cut (wheat etc.) with reaping-hook, originating in the seventeenth century; also badge, a verb with the same meaning, of unknown origin.

A comment (2009) by Bill Sievwright also rules out the reference to Bagrun – the King of the Danes was called “Bagsecg” not “Bagrun”,

I refer to your article on “Bag(g)s tree” and note that you say it refers to a Danish leader, or king, called Bagrun, as being the person associated with the tree. Reading a book recently about King Alfred I noticed that it says the Anglo-Saxon Chronicle refers to the Dane killed at the battle of Ashdown as being “Bagsecg” not “Bagrun”, and the following (paraphrased) info is given on a Wikipedia page:Bagsecg (died January 8, 871) was a Viking leader referred to as a ‘King’ and was possibly a King of Denmark, after Horik II died and ruled Denmark after his death from the 860s to his death in 871. He is also known as Bægsecg or Bagsec. He was leader, along with Halfdan Ragnarsson, of part of the great Danish army which invaded Wessex in 871. That army subsequently lost the battle of Englefield against a local saxon army, won the battle of Reading against Ethelred and his son Alfred, but was killed along with five Danish earls at the battle of Ashdown on the North Wessex Downs.

Therefore, is it not likely then that the tree in question was named after Bagsecg, not Bagrun? I can find no trace of anyone called Bagrun.

Generally, where there is a landmark it is common for people o try to link it to  a famous past event or person. Of all the explanations, the local surname one strikes me as the most likely. Might be interesting to find the origin of the surname Bagg – where there is a final ‘s@ it often means it was originally son of Bagg but the ‘on’ dropped off !  [JMT]

The Millennium Book also has a map referring to the Enclosures Award of 1802 (should be 1804?) which shows a Ham Tree, not Bag’s Tree – see gallery below.

Gallery of Maps, mainly OS Maps, showing mention of Bagg’s Tree (or not).

This site uses Akismet to reduce spam. Learn how your comment data is processed.